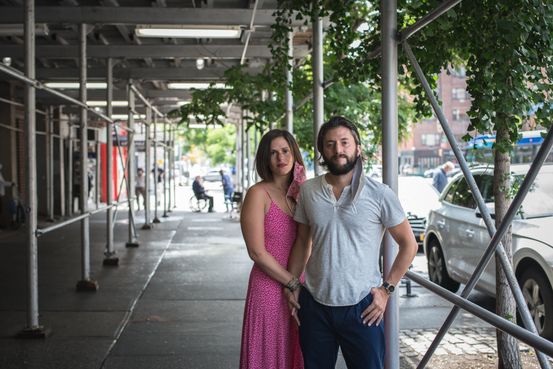 Gillian Holdstein and Jarred Roth were both in California for business in March when the pandemic hit. So the New Yorkers decided to stay for good.

The couple chose to move to Sonoma about four weeks into quarantine at their friends’ house in the wine region. Ms. Holdstein’s employer, the e-commerce firm MikMak, let her open their first West Coast sales office from home. Mr. Roth is focused on a restaurant he is preparing to help open in the area.

They flew back briefly to gather their belongings, including Mr. Roth’s cat, Jerome, who had been on an extended stay with friends.

The coronavirus is challenging the assumption that Americans must stay physically tethered to traditionally hot job markets—and the high costs and small spaces that often come with them—to access the best work opportunities. Three months into the pandemic, many workers find themselves in jobs that, at least for now, will let them work anywhere, creating a wave of movement across the country.

Recessions tend to damp migration. Americans typically move with a new job already in hand, and hiring plummets during downturns. The 2008 financial crisis limited Americans’ mobility because millions of homeowners found themselves underwater on their homes, unable to sell without taking a loss.

But this time might be different. Home prices haven’t yet taken a major hit. And the forces at play are novel. Confronted with the prospect of not being able to easily fly in for a visit with an elderly parent, grown children are suddenly questioning why they live so far away in the first place.

Many newly remote workers are finding they prefer somewhere closer to family or fresh air. Others are giving up on leases they can’t afford, chasing opportunities in states that are reopening faster or heading back to hometowns.

All told, at one point in April, Americans were relocating at twice the pace they did a year earlier, according to Cuebiq, a data firm that tracks movement via mobile phones. They continued to move at an elevated rate through mid-May. Cuebiq’s tally includes any trips away from home that last at least three weeks, so it also captures some temporary movement, like people decamping to vacation homes and students moving home from college. 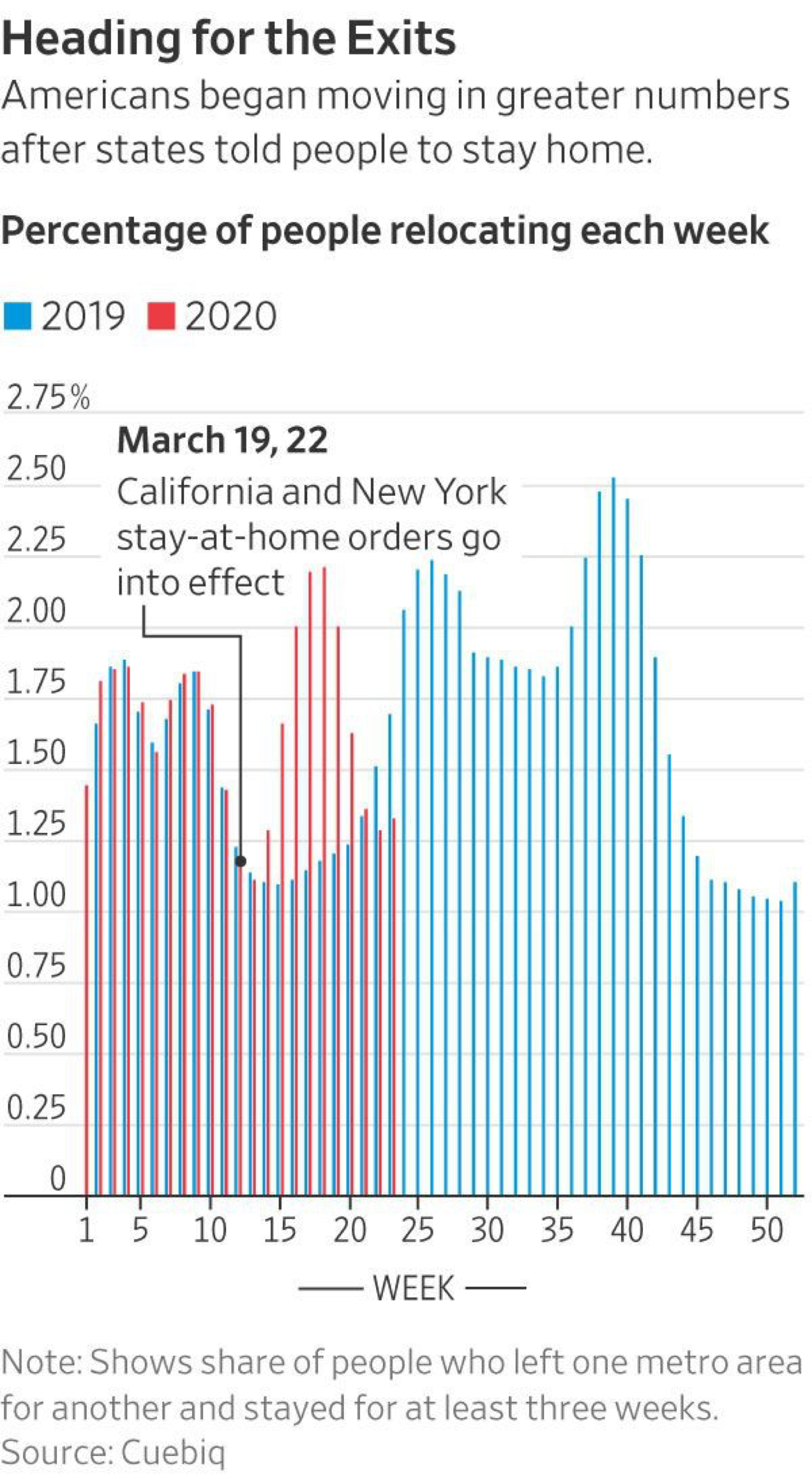 It’s too early to tell how many of these moves are permanent and how, in aggregate, new migration patterns might reshape the country. Some people who left big cities early in the pandemic are realizing they miss working from an office—or their companies miss them, and want them back in their cubicles. Others are staying put because they don’t know when their companies will make them come back.

Still, coronavirus-spurred moving could accelerate a shift already under way from dense, expensive cities to more affordable areas, including small cities and suburbs.

In places like Boise, Idaho, real-estate agents say people are finally breaking ties with the West Coast after years of waffling, and sometimes buying properties sight-unseen.

Telecommuting is fueling many of the moves. Companies like Twitter Inc. and Facebook Inc. are already declaring their monthslong experiment with remote work a success, giving many workers permanent permission to detach themselves from the office. Other companies that just six months ago would have scoffed at letting employees work from home are embracing it.

Still, not everyone expects to see millions of Americans packing their bags.

“It’s obvious that the number of remote workers is going to jump up,” said Thomas Cooke, a demographic consultant who recently retired as a geography professor at the University of Connecticut. “But it’s not so clear-cut that it’s going to be this huge transformation.” 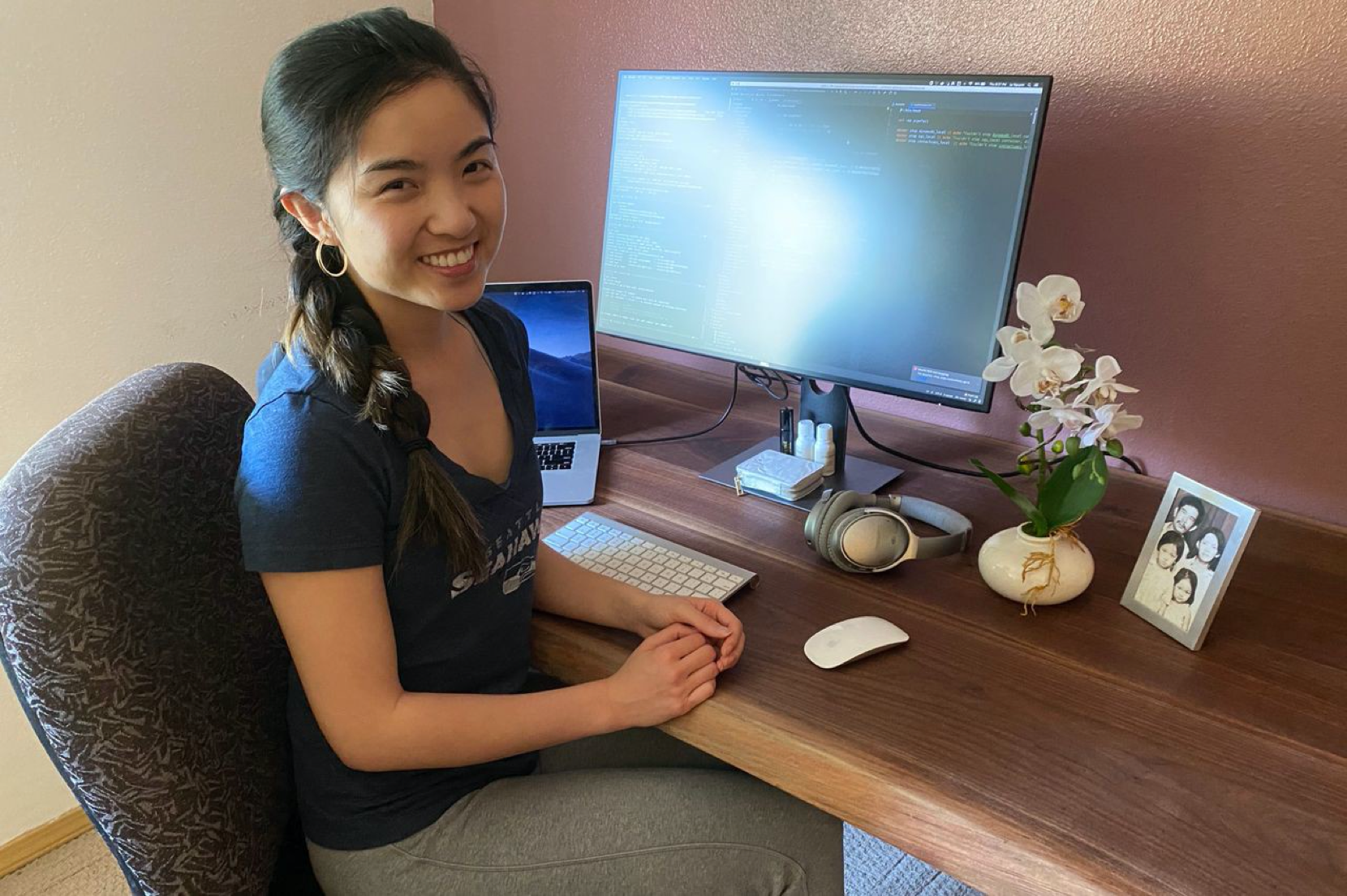 Ly Nguyen, a software engineer with tech company Twilio, has been working from her family's home in Seattle. CREDIT: NGUYET VO

For many, it isn’t even an option. The ability to pull up stakes while keeping one’s job is far easier for white-collar workers. Family obligations, like children in school, can also keep people from moving. And the death of big cities has been heralded before. New York’s real-estate market took hits after the Sept. 11 terrorist attacks and the 2008 economic downturn, with some share of the population leaving after each shock. But Manhattan always seems to rise again, and urban centers like New York and San Francisco have continued to be gathering places for young talent to congregate and companies to find it.

Already some companies are rethinking their work-from-home experiments. Executives at Twilio Inc. , a San Francisco-based tech company, in early May were leaning toward giving employees a one-time offer to move where they wanted and work remotely permanently, according to chief people officer Christy Lake. By the end of the month, the company had scaled back its approach, instead telling employees they could work from another city or state domestically through the end of the year, if they got approval from a manager.

Still, the company, which has about 3,000 workers, has said yes to about 15 employees who have asked to move permanently. Ly Nguyen, a 28-year-old software engineer in the company’s Redwood City office, had lingered in California for years longer than she intended because of its career opportunities. Then the coronavirus hit, and Ms. Nguyen’s longtime plan to move closer to family in Seattle took on new urgency.

“It definitely made me feel like this is the right move,” she said.

Ms. Nguyen drove north in mid-March and discussed a permanent move with the company the next month. With everyone working remotely, there was less stigma to not being in the office, she said. She’s now hunting for a house to buy.

In places where work has dried up, leaving town is sometimes the only way to keep a business going.

Nate Whitehouse took a work trip to Texas in mid-March and never came back. Mr. Whitehouse is a co-founder of Drifter Spirits, which develops and markets alcohol for craft cocktails. But with New York City’s bars and dining rooms still empty, his company now plans to shift its center of gravity from New York to places like Texas and Florida that are reopening faster.

He’s currently living with family in the Fort Worth and Austin areas and gave up the Brooklyn apartment that served as his living space and the company’s offices. Colleagues moved the things left behind—tiki mugs, vintage suitcases used for trade shows, his bed—to his business partner’s parents’ house in New Jersey. They shipped him his passport.